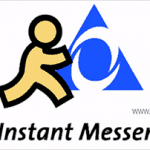 AIM (AOL Instant Messenger) was one of the most popular apps in the United States since the late 1990s till the end of the first decade of 2000s. After that with the emergence of social networking sites/apps like Facebook, Skype, Twitter, etc. the downfall of AIM started. AOL Inc (now American online) discontinued the AIM service from the end of 2017. This might be the … END_OF_DOCUMENT_TOKEN_TO_BE_REPLACED

We use cookies to ensure that we give you the best experience on our website. If you continue to use this site we will assume that you are happy with it.OkPrivacy Policy